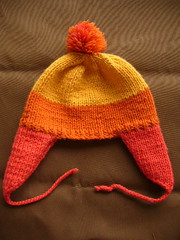 jaynehat
Originally uploaded by snuffykin
I just got back from a midnight movie theatre screening of Serenity. The house was 3/4 full of cheerful fans when I walked in during the pre-show entertainment. Spotting someone I knew, I squeezed into the row and doffed my Jayne Cobb hat, shown in photo below. I heard someone behind me say, "I want a hat."

A spunky young lady, also wearing a knitted Jayne hat, played her guitar and sang the theme song to Firefly - "The Ballad of Serenity." Some of the audience joined in, but singing in public was too far for me to go for fandom!

Then there was a very funny singing contest between two men, dressed as Wash and Mal. They sang alternate lyrics to the "The Man They Call Jayne" with great aplomb and gestures! The audience voted "Wash" was better. The winner received a knitted Jayne hat and a handwritten note from Ma Cobb, which he read aloud in Jayne's character.

In the last part of the pre-show, contestants juggled goslings. This was a reference to Wash, who juggled goslings for fun in his youth. The audience again voted by clapping for their favorite. The winner received a Serenity DVD.

Without any leading trailers, the film started. And what a marvelously pristine print it was! No scratches, or pops or wiggly lines! I've seen it several times before, but not for many months. It's weird how I can anticipate every line, every joke, the inside jokes and trivia, and yet I still enjoy it. Judging from the reaction of the audience, they had seen it many times too, yet still laughed and gasped as if it were new.

This is the only time I ever wear my Jayne hat in public... for Serenity screenings. During the winter I wear it as a nightcap. It keeps my head nice and toasty as I sleep. :-)

I finished a whale amigurumi, from a free pattern downloaded from a Japanese website Pierrot. This is my first time following a pattern in Japanese. Fortunately, the chart is so clear, it is easy to follow.

Edit on 11/11: You'll find the whale pattern pdf by clicking on the link "figure knitting". Gull and frog pattern is "woven figure." On the webpage, right of frog photo, the last two links available are for pattern pdf downloads.

I picked out this whale to do for the

weloveamigurumi  November ami-along "under the sea". I rummaged through my yarn stash, but none of the colored yarns seemed right. I picked out this off-white, or natural, cotton by Lily Sugar n Cream. It is very minimalist-looking, this whale, but I like it. 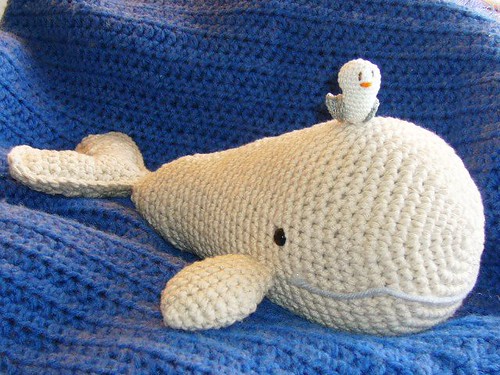 I did not join rounds or start rounds with a chain stitch, as shown in the chart. Also, I skipped the last round for the 2 fins. I put in black safety eyes and glued a piece of light gray yarn with FabriTac as the mouth. The tail has a little bit of stuffing in it. 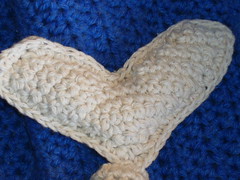 Once I finished the whale, it was looking a bit like it needed a friend. I made the seagull, pattern from the same website, with white crochet thread, gray-blue embroidery floss and size 8 steel hook. This is my first amigurumi in thread crochet. 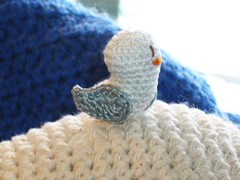 Opted not to do the frog from the same pattern set,  because it looks hysterical and psychotic. And I've never heard of a sea-frog.