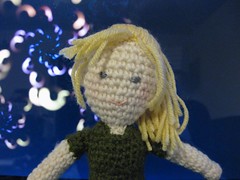 Jenny was a character that appeared last season in an episode of you-know-what, "The Doctor's Daughter" and was played by actress Georgia Moffett. Although she was just in that one episode, I imagined that miniDoctor would like her as a companion. ^-^

She should be an action figure, with chopping action arm. Thwack! And bendable joints so she can do backflips. flipflipflipflip 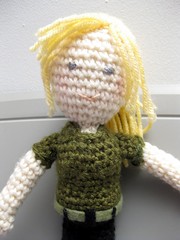 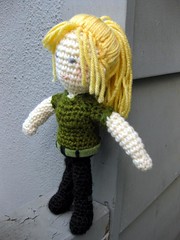 She turned out surprisingly cute with her lil ponytail. Now if I can just get some action shots with "Dad." 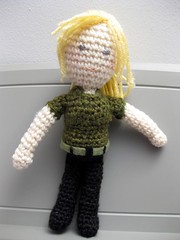 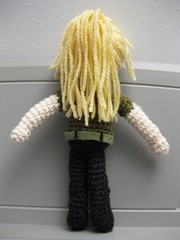 I used the Rose Tyler "Boomtown" doll pattern and switched out the green for the pink. The green yarn is Lion Brand Vanna's Choice in Olive. Her hair was done more like the second "50's" doll. I would have used a lighter yellow with more white in it, but that's the color I had. I think it is TLC in Cornmeal. The belt is made of a strip of felt. 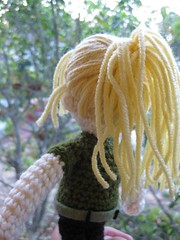 The Beeb has photos from the episode where Jenny appears here.
ps Thanks again to red scharlach for the icon and to